We arrived in Birmingham during the later part of the summer of 2016. Luckily, we were able to sneak in a Baron’s game and were happily surprised that one tradition is very similar to what goes on in a Washington Nationals game.

Sometime during a Nationals game, 3 mascot presidents (Teddy Roosevelt, Abe Lincoln, and George Washington) go for a race around the field. Someone always trips Teddy and then the winning mascot has a great victory. We enjoyed this tradition in Birmingham. Apparently, it is done with food mascots and I dont remember who got tripped. 🙂

At least all the mascots were happy at the end of the race. 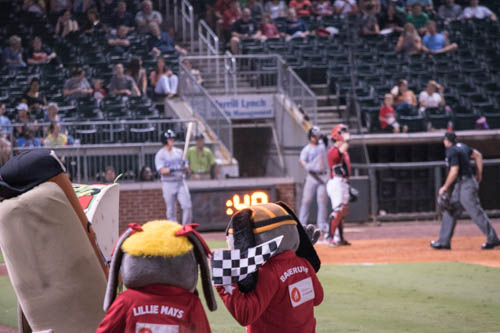